What If God Showed Up At Your Kid’s Soccer Game? 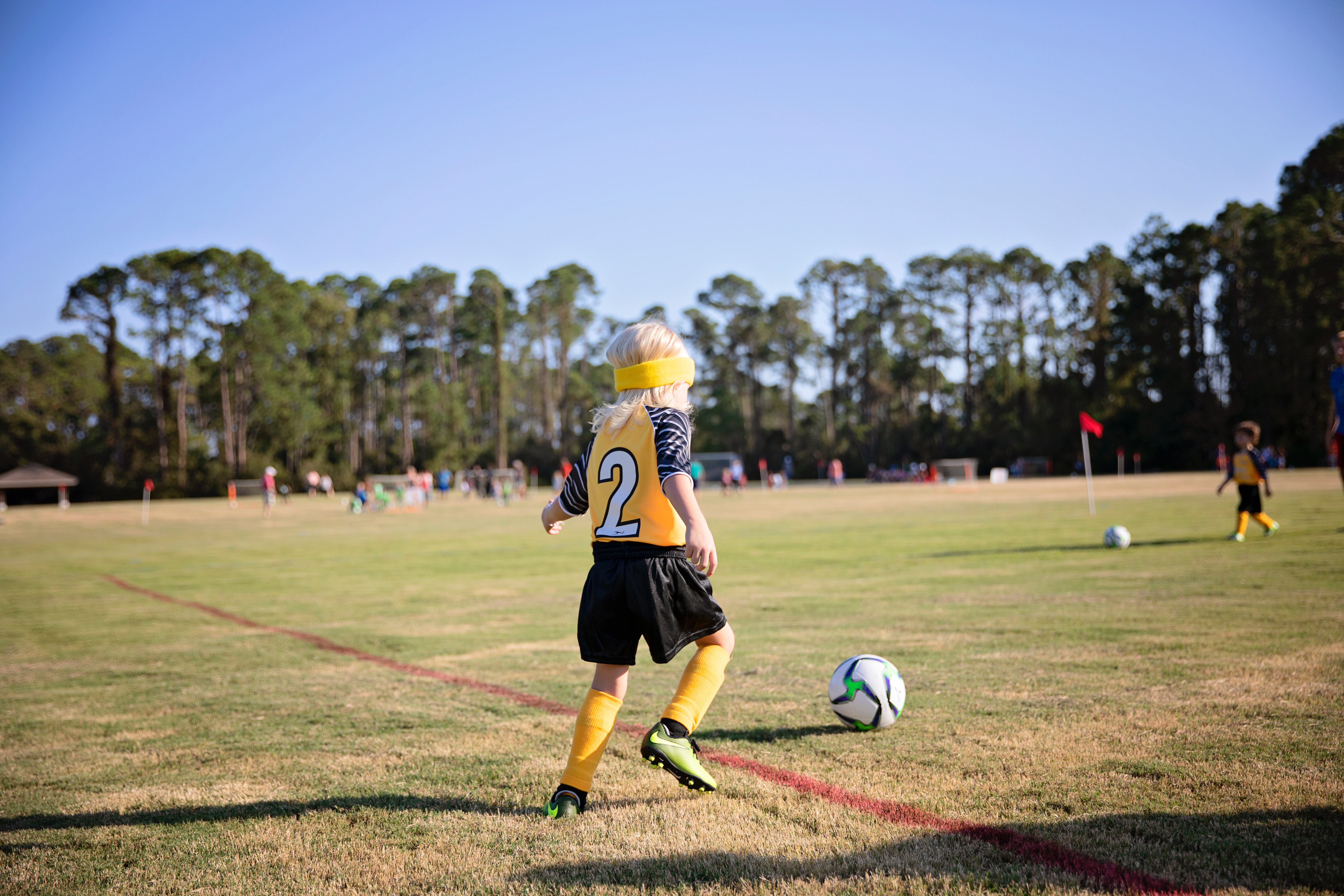 *What follows is word for word from my children’s book: The Star In The Stands.

“Hudson, time to wake up!” Hudson’s mom shouted from the bottom of the stairs.

“We need to leave in thirty minutes!”

Hudson had a soccer game today.

He got dressed and brushed his teeth. But he did not brush his hair. 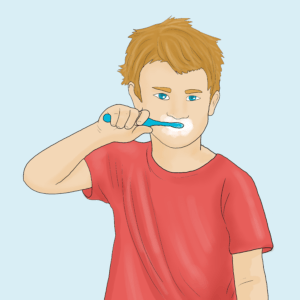 On the way to the game, Hudson’s parents tried to remind him of everything he had learned in practice that week.

“Don’t forget to stay inbounds, and when Coach tells you to chase the ball, run your fastest,” they said.

It was a lot to remember!

His brother and sister were in the car too. They were laughing loudly, and it was hard to hear what his parents were saying from the front seat.

After his parents finished reminding him of everything, they said, “And don’t forget to have fun!”

Hudson smiled. He liked that they said that. He was really good at having fun! 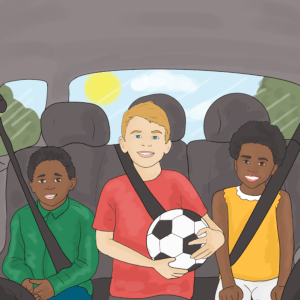 Hudson made it to the game on time. When he walked onto the field, he noticed something bright and shiny coming from the stands.

It was in the front row among the rest of the fans.

He was curious and wanted to walk closer to see what it was. But he decided it was probably just the sun reflecting off the metal. 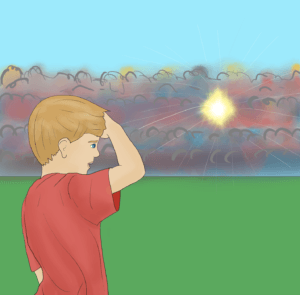 The referee blew the whistle to signal that the game would start in a little while.

“That whistle scares me every time! I never know when he is going to blow it!” Hudson told his teammates.

They all laughed together. One of Hudson’s favorite parts of the game was getting to play with his friends. 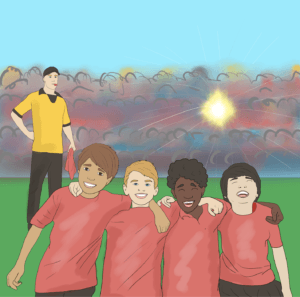 As the teams took their last practice shots, Hudson looked back at the stands. They were filling up with a lot of people. The shiny light was still there, right in the front row.

He noticed something strange about the light. It almost looked like it was sitting down.

He walked a little closer to get a better look at it.

When he got close enough, he was surprised to see it was not a reflection.

It was a star! 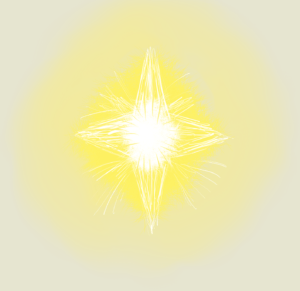 The referee blew the whistle again. It startled Hudson a little bit.

The teams got into position and waited for the game to start. 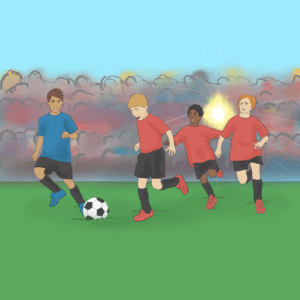 Right before the game started, people in the stands started to shout things like this:

“Remember what we practiced!”

“Don’t forget to use the sidelines!”

“Really try to use your other foot more today to kick the ball!”

Hudson thought of all the tips he got on the way to the game. There were too many to remember! I really hope I don’t forget any of those things when the game starts, he thought.

The fans were all smiling and just trying to be helpful. But their shouting made Hudson a little nervous.

The star didn’t say anything, because stars don’t talk. It just shined brightly at Hudson. He was glad the star was at his game. For some reason, it made him feel calm. 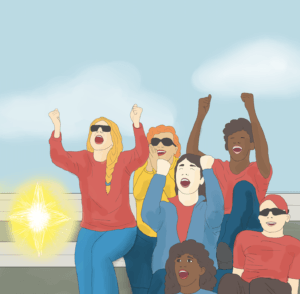 As the game started, Hudson noticed something else about the star.

Yes, it was sitting with all the people in the stands, but it acted differently than everyone else.

Anything that made the fans excited or angry didn’t seem to bother the star.

In fact, nothing seemed to bother the star, good or bad. It seemed perfectly content to just watch the game. 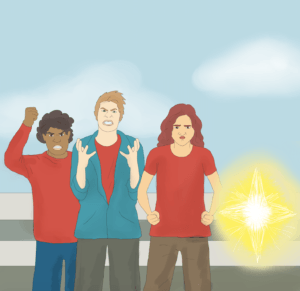 When the ball got close to the stands, the fans were even louder. Hudson could hear them say, “Kick it forward! Pass it! Take it from him!”

Most of them were just trying to be helpful, but the shouts still made Hudson a little confused and sometimes unsure.

He didn’t know what to do with so many voices shouting at once.

The star didn’t say anything, because stars don’t talk. It just watched. 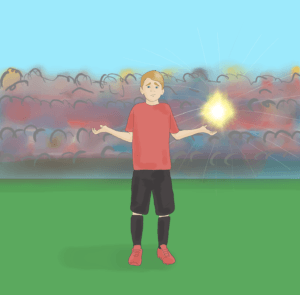 One time Hudson had a chance to score a goal for his team. But he missed. He was upset that he missed! He slapped his hands together. “I’ll try again,” he said to his teammates as they ran past him.

He could hear people in the stands say, “Oh! So close!” Some of them sounded bummed that he missed it too. Everyone was looking right at him. Hudson didn’t like being the center of attention because he missed the shot! I wish everyone wasn’t staring at me, he thought.

He looked at the star. The star didn’t say anything, though, because stars don’t talk. It still shined brightly, and it focused its light even more directly on him than before. Hudson felt warm. 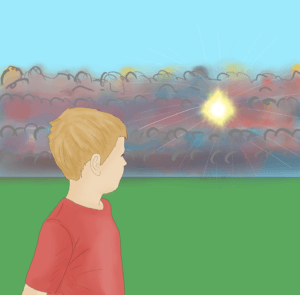 A short time later, Hudson’s teammate made a great pass to him, and he scored a goal! The people in the stands cheered louder than they had the entire game. He jumped in the air in celebration! He was happy when people cheered for him.

Even though I don’t like everyone looking at me, at least they are cheering me on, he thought. He wanted to score more goals to keep them cheering.

Hudson started to get worried that maybe they would clap and cheer only when he scored.

But scoring goals was really hard! 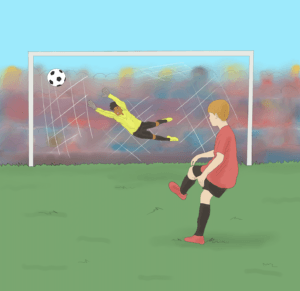 The star didn’t cheer or say anything when Hudson scored, because stars don’t talk. The way it shined at him made him feel special, though.

It looked a little brighter than before. It was almost like the star was happy because Hudson was happy, not just because he scored a goal.

In fact, the star didn’t seem to care about the score at all! It seemed happy to simply watch Hudson play. 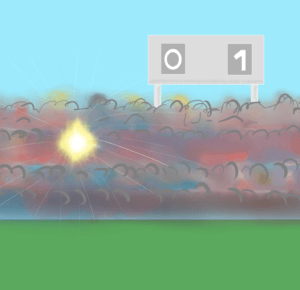 The score wasn’t the only thing the star didn’t pay attention to. When the referees made a bad call, the people in the stands got upset and even said hurtful things. Sometimes this scared Hudson.

I really don’t like it when the grown-ups yell, he thought.

But the star didn’t pay attention to what the referee was doing. Hudson noticed that when the referee made a mistake, the star seemed to be more concerned with how Hudson reacted. 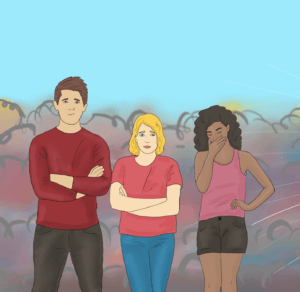 The times the star appeared to be happiest had nothing to do with the game.

It got excited when Hudson helped an opponent to his feet after he tripped and fell. Or when Hudson told a teammate “Good try!” after missing a shot.

The star never said anything, of course, because stars don’t talk. But its light was the brightest when Hudson showed kindness to others during the game. 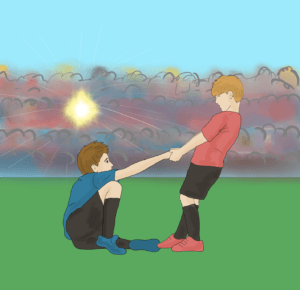 Every once in a while, the coach gave Hudson a rest on the bench. Sometimes he liked this because he got tired from all the running! But other times he was sad because he really wanted to keep playing.

The people in the stands wanted him to keep playing too! They asked the coach about putting him back in the game. Sometimes Hudson felt embarrassed when they kept talking to the coach about him.

But the star never said anything, because . . . well, you know by now.

The star stayed focused on Hudson, even when he was on the bench. He could tell the star really liked him. He liked the star too! 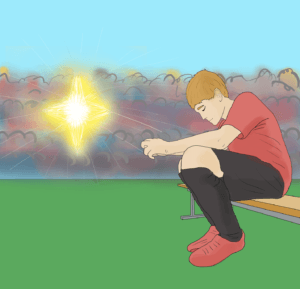 After the game ended and everyone left the stands, Hudson noticed something where the star had been sitting. There was a note!

I am so proud of you! I love you, and I really enjoy watching you play, win or lose.”

Hudson finished the letter and smiled. He looked to see who had left it, but no one was around.

Did Mom or Dad write this? Or was it…the star?

Hudson folded the letter and took it home with him. 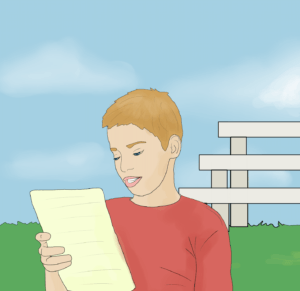 When it was dark outside, Hudson got ready for bed. He put on his pajamas and brushed his teeth. But he did not brush his hair.

Hudson climbed into bed that night wondering where the star was. As he closed his eyes, he noticed a light coming from his window.

He walked over to the window to pull the curtain, but he stopped when he saw it: the star! It was shining brightly in the night sky. And the light was pointed directly at him. 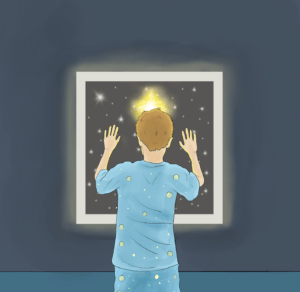 Hudson smiled and went back to his bed. He left the curtain open, allowing the star’s light to keep shining in. He fell asleep wondering if the star was going to be at his next game. He hoped it would be! 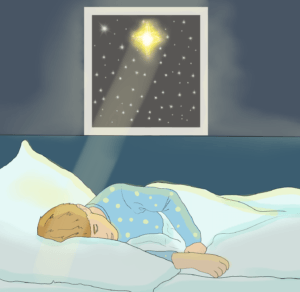