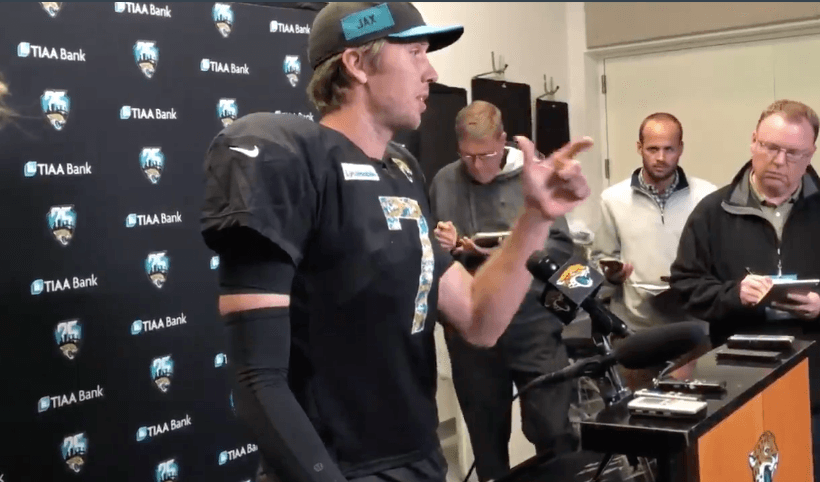 Nick Foles has had an interesting career. Playing mainly in a backup role since he was drafted in 2012, Foles was pressed into action for the Eagles in 2018 when Carson Wentz went down with a season ending injury.

Foles led the Eagles to a Super Bowl win, earning the Super Bowl MVP in the process. His performance with the Eagles led to a huge contract with the Jacksonville Jaguars this past offseason. More importantly, it offered another opportunity to enter the season as the starter for an NFL franchise.

But things didn’t go as he planned.

Nick Foles broke his collarbone in his first game with the Jaguars.

He has since healed and retaken the starting spot for the team. So what has he learned from the last few months sitting on the bench? Foles had a chance to explain his thought process to reporters earlier this week. Whether he intended it or not, the interview turned into a two minute sermon.

And it’s one worth listening to:

A message today from Nick Foles

For anyone who needs to hear this: pic.twitter.com/jNwCGmESFw

If we could pull the notes from his impromptu sermon, I think we would find 7 crucial points.

I’ve written about this numerous times so he obviously had my attention right off the start. We hear athletes glorify God all of the time after a win or a highlight performance. It’s rare to see an athlete give the glory to God in the midst of a trial. It was refreshing to hear Foles admit that although he saw things going a different direction, he still trusted God.

God’s ability to receive glory is not contingent on sports success.

“I still can have joy in an injury”

This statement sounds so contrarian. How can you still have joy while being injured? Shouldn’t the injury rob you of the very joy you could have experienced playing the game you love? For Foles, joy is not dependent on circumstances. It’s dependent on the Person and work of Jesus Christ. His quote above reminded my of Philippians 4:12-13 where Paul says:

Foles’ NFL experience has been a roller coaster of emotions. It seems like he has learned the secret of being content, regardless of the situation. His joy is in Christ.

Talking about winning the Super Bowl in 2018, Foles points us again to a greater reality. Sports are great. Winning is great. But neither should define us. Like Paul in Philippians 4, Foles is able to share about a contentment in Christ in a mountain top experience—and in the valley.

“It’s not about us. My purpose in life isnt football, it’s impacting people.”

Oftentimes, the thing that gets us through the pain is proper perspective. Foles understands his purpose goes beyond the sport he plays. He rightly prioritizes people above the game.

If his primary purpose was football, the broken collarbone would have also broken his spirit.

But his higher calling allowed him to persevere through admittingly difficult times. You can impact others whether you’re on the field leading the team or in training room/locker room conversations. Speaking of locker rooms…

“My ministry happens to be the locker room”

I loved this for two reasons. One, Foles understands that you don’t need to be a professional Christian to have a ministry. If you are in Christ, you have a mission field. Again, we can look to the Apostle Paul for affirmation here. This time in 2 Corinthians 5:17-20:

“Therefore, if anyone is in Christ,the new creation has come: The old has gone, the new is here! All this is from God, who reconciled us to himself through Christ and gave us the ministry of reconciliation: that God was reconciling the world to himself in Christ, not counting people’s sins against them. And he has committed to us the message of reconciliation. We are therefore Christ’s ambassadors, as though God were making his appeal through us. We implore you on Christ’s behalf: Be reconciled to God.”

Foles understands that above all else, he is an ambassador for Christ.

Secondly, Foles sees his teammates, coaches, trainers, and support staff as his mission field. He is the star quarterback of an NFL team and a Super Bowl MVP. The entire sports world knows his name. It would be easy—and appropriate—for him to say the millions of fans are his ministry.

But he knows his primary focus and platform comes from within the walls of the Jaguar’s facilities.

Guess who I am going to reference in the Bible to echo this truth? Yep, Paul. This time in Romans 5:3-4:

“Not only so, but we also glory in our sufferings, because we know that suffering produces perseverance; perseverance, character; and character, hope.”

Now, I am not comparing the sufferings of Paul with Foles’ broken collarbone. I’m pretty sure he wouldn’t either. But the progression of suffering to perseverance to character to hope is exactly the process Foles went through—even if it was at a different level than Paul.

“I don’t believe in the prosperity Gospel”

Foles opened his sermon saying he wanted to glorify God in the good and the bad. Like any great communicator (or pastor), he doubles down on his main point to close things out. When we choose to believe that God can only be glorifed and pleased through success, we believe a false gospel. I wrote about this earlier in the NFL season after the Bears kicker made the game winning field goal. Foles calls this gospel what it is: the prosperity gospel.

The prosperity gospel says this: if I trust in God and have enough faith, he will reward me with earthly blessings like health, wealth and success.

Within the context of sports, that means if you lose, it’s because you didn’t pray hard enough, or sinned earlier in the week, or because you didn’t have enough faith. The prosperity gospel teaches that you would have won had you done the right things or had more faith that God would bring you out on top.

But God cannot be manipulated that way. Foles rightly points out that Bible shows us trials and sufferings will come our way.

Nick Foles preached why we need to trust God in the highs and the lows. He preached with his words in a two minute interview.

And he’s preaching it with his life.