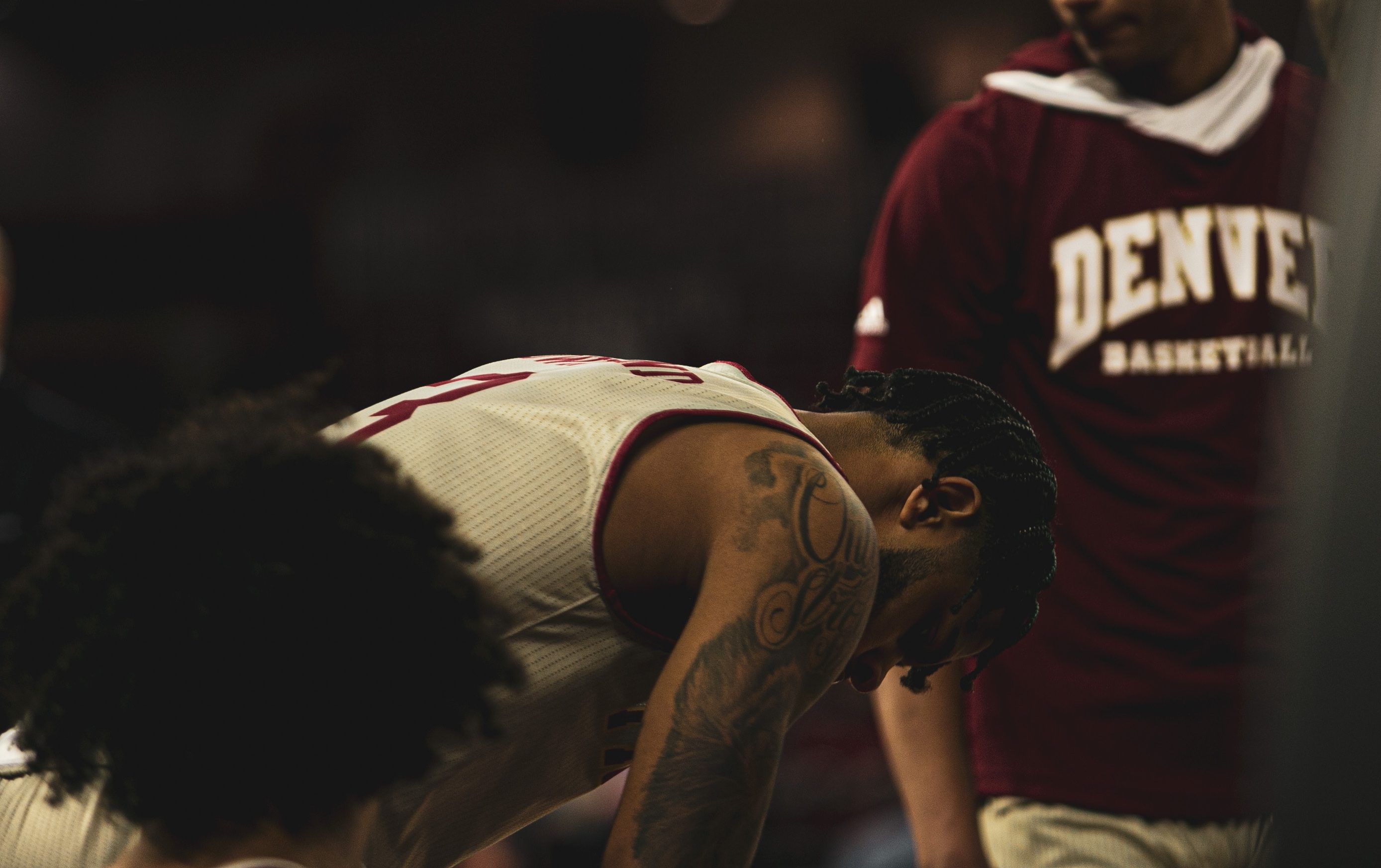 The people I work with love google docs. I get it. They’re convenient, easy to use and intuitive. Plus, multiple people can work on the same document at the same time from anywhere in the world. My only issue with google docs is this: I often have no idea where to find them when I need them the most. I have thousands of google docs in my google drive. Literally, thousands. Because I don’t have a good folder system within the drive, they are organized by alphabetical order. This helps when I know what the document is titled. But who remembers what they titled documents beyond the ones they created last week? Not me.

Every document I have ever started, as well as the ones shared with me, are all sitting in the drive. Somewhere. They don’t magically disappear. And if they’re not in the right place, they don’t help me.

Where we put things and how they are labeled matters.

I discipled Reggie during his sophomore and junior year. He was one of the better athletes on his soccer team and when things clicked for him, he was a beast. But he often played timid. When he didn’t have success on the field, he spiralled in his personal life. His failures on the soccer field became an extension of who he was as an individual. Reggie couldn’t separate who he was from the sport he played. Unhappy and depressed, he eventually quit playing college soccer.

His story is not unique.

Because most athletes grow up in sport culture, where who you are and how you are viewed is an extension of your latest performance, athletes often default to letting losses and hardships define them. What does that mean? It means they take the experience of the loss and file it away in their heart and mind under a folder marked “identity.”

When they think about who they are (mentally double clicking on the identity folder), they have trouble viewing themselves apart from these bad performances. And because they have consistently allowed themselves to be defined by the outcome of a game, future participation in these games are approached with timidity and fear, knowing one wrong move has implications far beyond the playing field. This compounds the problem.

Academic research backs this up. Athlete’s have a tendency to “position shame at the core of fear of failure and described it as an agonizing experience in which individuals perceive their global self as a failure.”

Studies also show that coaches often contribute to this problem by creating a culture of fear and control amongst their teams. If athletes’ fear of failure is really a fear of experiencing shame or humiliation, coaches most often deliver the knockout punch that keeps athletes in this rhythm of experiencing shame after a performance. In fact, Reggie once told me that when he first entered the game for his college team, his coach said to him “Don’t screw this up.”

This doesn’t motivate athletes. It paralyzes them. It reminds them that shame waits patiently on the other side of whatever failure they experience.

I have seen it consistently over the past decade working with athletes at the college level. Even if the coach isn’t intentionally trying to shame the athlete, it’s often received that way.

Yes, some studies show how an appropriate level of fear can motivate an athlete towards a max performance. But most of the time it doesn’t. For a coach—especially a coach who desires to prioritize their faith, pursuing peak performance needs to come in second place to pursuing peak personhood.

At the end of the day, this is about prioritizing the individual over the performance. And prioritizing who people are over what they do is vintage Jesus. It’s a Kingdom principle we see him model many times in the Bible. The twelve disciples were a mess. But Jesus looked beyond their external flaws. While the crowd wanted to stone the woman caught in adultery, Jesus chose not to judge her based off of her worst moment. Jesus engaged the woman at the well by asking questions that showed he knew her. He called Zacheaus, a tax collector that the community despised, down from the tree and ate a meal with him.

Our propensity to label people based on their worst moment is not a 21st century trend. Mankind has always bent towards categorizing people this way. But Jesus modeled a new path for us. He challenges us to view ourselves, and others, beyond the external. He challenges us to not identify with shame.

There is a better way forward. And here’s the crazy thing. I think the better way actually produces better results in competition.

Regarding a loss or a hardship experienced in sport, I think athletes have two separate internal folders they unknowingly file these experiences into. If the first folder is “identity” the second is “lessons.”

In this case, the athlete experiences a hardship or a loss, is appropriately frustrated by the outcome, but quickly learns from it and commits to getting back from the experience. The loss does not define; it becomes an opportunity to refine and grow.

Again, think of the compounding effect of this perspective. Because the loss does not affect who they are as an individual, they are able to approach the next competition or challenge with freedom and risk—understanding that their energy or effort level is not held hostage by others’ approval and the potential of shame.

The diagram below charts the two paths athlete’s can take after hardship or loss. 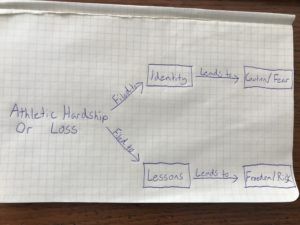 If you had to choose, which route do you think most athletes take? Like I previously stated, our current climate in sports teaches athletes that who you are and how you are viewed is directly related to your latest performance. Social media serves to feed and reinforce this.

So, what’s your role? As a coach, what are you supposed to do with athletes who default to defining themselves by their performances?

Your role, coach, is to help them drag the experience from the identity folder and drop in in the lessons folder. 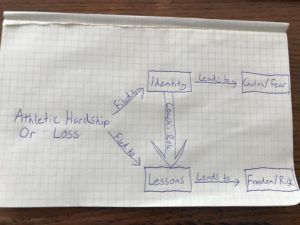 How do coaches do that? I think there are four steps.

They refrain from getting swept up in the heat of the moment. They remind themselves and the athlete of their value apart from the sport they play. They re-frame the moment to show greater perspective. And in doing those three things they redeem that moment back to what God intended to use it for in the athlete’s life. And maybe even the coach’s.

Refrain from getting swept up in the heat of the moment

Listen, I get it. If you have any competitive bone in your body, it’s easy to lose perspective in the moments following a loss and wound athletes with your words. Refraining does not mean you don’t get upset. Refraining does not mean you can’t be frustrated, annoyed, or disappointed. For some of you, your job depends on the performance of the athletes and to expect you to stay positive—or even neutral— after a tough loss is unrealistic and wrong.

What I mean by refraining is not responding in a way that shames the athlete(s). It means in the moments after the game, focusing on the team instead of calling out individuals. It means, if you have to call out an individual, avoiding phrases like:

“That was the worst play I’ve ever seen.” (Catastrophizing)

Whether intended or not, those phrases—and others in their respective categories—reinforce that the athlete’s identity is primarily attached to their performance.

Words matter, but so does your tone. A harsh and shaming tone will probably make you feel better (as a dad, it makes me feel better in the moment!) but it will not serve them well. And that’s ultimately what your role is: to serve them into becoming the best possible versions of themselves both on and off the field. You can’t change a past performance but you can change future performance with the way you respond as a coach.

Remind the athlete of their value apart from sport

We need to move beyond the moments directly after the game with this point. This is more about the culture you are establishing on your team than the perfect post game script. Coach, the athletes on your team need to hear you say—clearly and consistently—that while their playing time may be dependent on their performance, your love for them is not. They need to hear, both corporately and individually, that their value as individuals far exceeds the value they provide in the box score or win column.

What are some ideas to cultivate a culture that values the athletes on your team beyond their athletic prowess?

Re-framing an experience is a unique opportunity for the coach to pull the athlete out of the forest and show them a view from the treetops. It’s an opportunity to say, “Hey, yeah that sucked, but let me show you how we can learn from this and get better. Let me remind you that what happened does not define who you are. Don’t let it. You can get better from this experience. Here’s how.”

And then tell them. Coach them. Help them get better. Leverage the hardship or loss to refine them.

If you are human, you will probably mess this up. A lot. You will probably say things that reinforce the connection athletes make between their identity and their performance.

Can I give you a good, biblical solution for when you screw up? Apologize. Seriously. Tell the athlete you wish you could have a do-over and that you are sorry. Coaches who take their faith seriously humble themselves in moments when they know they were wrong.

The re-framing part of the conversation is a great time to say “Hey, I know after the game I got on your case a little bit. I said a couple things I wish I could take back. I’m sorry.”

What’s the point of refraining and reminding and reframing (and maybe, repenting)? Simple. Whatever happened did not take God by surprise. The moment had purpose. When athlete’s believe the lie that their performance defines them, in a sense, they steal the intended purpose.

Your role as a coach is to partner with God and help get that purpose—or lesson—back.

The word redeem means to buy back or repurchase. It’s exactly what Jesus did for us on the cross. We were created to be in relationship with God. Our sin separates us. Jesus died on the cross and rose again to redeem us (repurchase) back to God.

When you show them a Godly, biblical perspective after a loss and help them see how they can learn from it, you play a vital role in redeeming the moment in their life. You show them love. Maybe even more than the moment itself, you allow yourself to be used as an instrument by God to help redeem sports as a larger entity in our culture.

This happens one athlete at a time. One experience at a time. Refrain, remind, reframe, and redeem. Why? So when your athletes contemplate who they are and they double click on the “identity” folder in their mental harddrive, it will be filled with what God says is true about them —not past athletic failures.

P.S. If you want me to send you some free resources, subscribe below and I will send you some great stuff! I promise not to spam you either:)