Can God Get Glory From A Missed Field Goal? 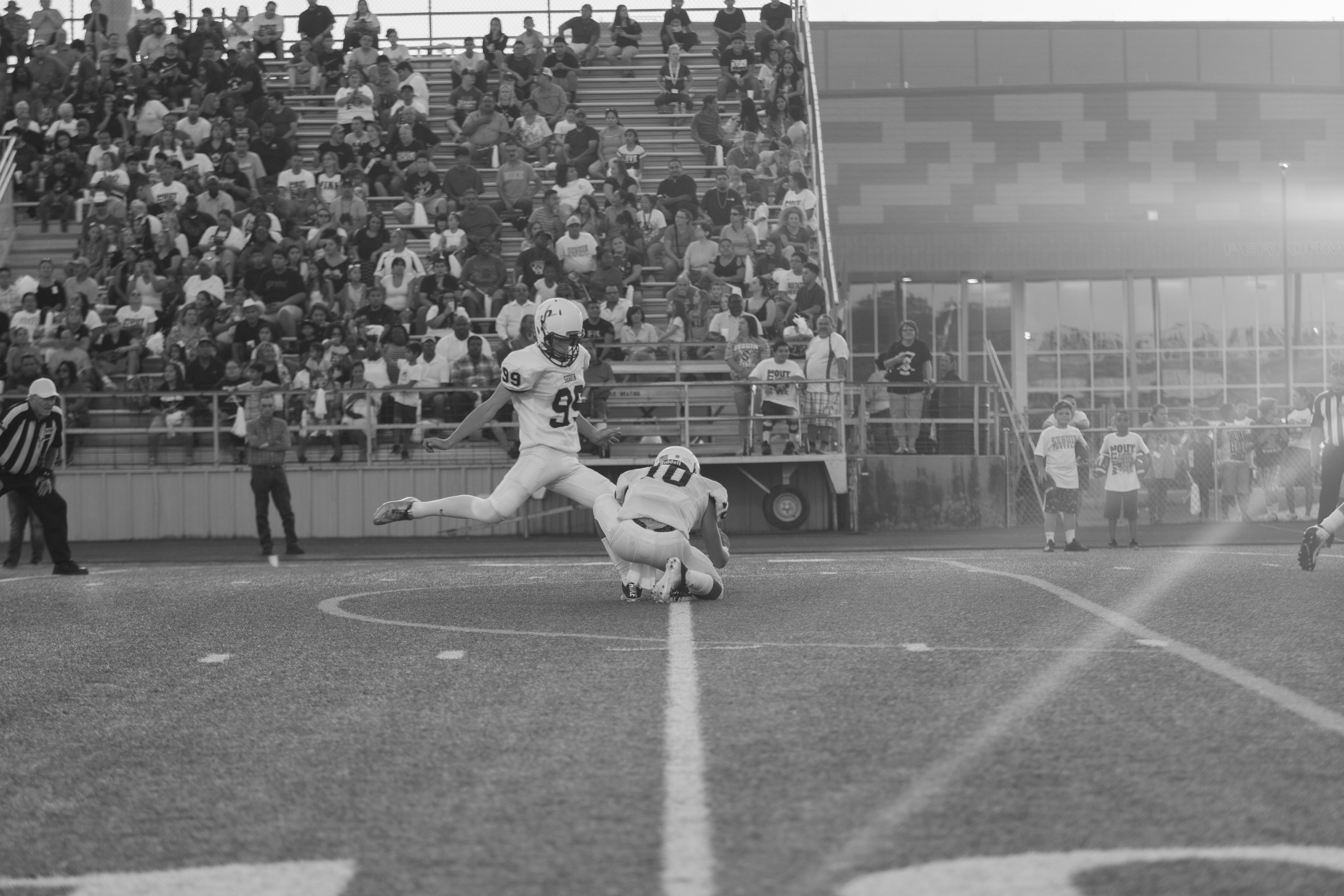 With a chance to send the Chicago Bears to the second round of the NFL playoffs, Cody Parkey watched the football he kicked bounce off of two uprights—and fall into the end zone. After slow-motion replays confirmed a defensive player from the Eagles boasting that he touched the ball as it flew through the air, the kick was officially ruled as blocked. I have to imagine in the moment though, Parkey thought he just missed it. But what happened after the “miss” is what I want to talk about.

As Parkey ran off the field, having just contributed to a losing effort for his team, he made a gesture usually reserved for winning plays.

He pointed up to the heavens.

In the midst of post-game analysis and “what could have been” talk, this action circulated around social media like wildfire. And for good reason. Who does that? Who acknowledges God in their worst moment? On top of that, who acknowledges God in a losing effort in front of millions of people?

This is not new for Parkey. He appears to do this after every field goal he misses. Check out this screenshot from the game against the Rams earlier in the year after he missed a field goal late in the fourth quarter. 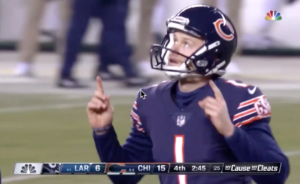 As the Bears team chaplain said in the comments section of an Instagram post after the game regarding Parkey: “Bowing before the King and giving honor and glory is never conditional.”

That’s easy to say and hard to put into practice. If God can receive glory from it, we would do well to follow Parkey’s lead and try.

Can God get glory from a missed field goal? Can he get the glory when we lose or when fail to succeed in ways we would have wanted as athletes?

Here’s why I think he can—and does:

GOD POSITIONS HIS PEOPLE FOR HIS GLORY

After God used Moses to lead his people out of slavery in Egypt and on a path to the Promised Land, he gave Moses a set of laws for the people to follow. In addition to aligning themselves with the character and purposes of God, these laws also set the Israelites apart from other nations. Deuteronomy 4:5–6 explains it this way:

“See, I have taught you statutes and rules, as the Lord my God commanded me, that you should do them in the land that you are entering to take possession of it. Keep them and do them, for that will be your wisdom and your understanding in the sight of the peoples, who, when they hear all these statutes, will say, ‘Surely this great nation is a wise and understanding people.’”

God gave them laws and told them how to act so they would stand out and be different from the surrounding nations. The idea was that other nations would take notice and say, “Wow! Look how different they are from everyone else.” And then they would ask, “What is it about them that causes them to act the way they do?” They were meant to be a peculiar people, a light to the nations. (Of course, they ultimately failed in their calling, and Christ accomplished what they couldn’t.)

I’m not making a direct comparison between today’s athlete and the Israelites. But there is a principle here to understand. When God’s people look different from the rest of culture, culture tends to notice. This theme is seen in the New Testament and throughout the history of the church. God’s people are called to practice obedience in the midst of trying circumstances.

When a Christian athlete wins, people expect him or her to give some of the credit to God. What culture doesn’t expect is for you to acknowledge God even when you lose. Especially when you are one of the main reasons why your team loses. If there is a sentence worth turning on the caps lock for in this piece, this would be it: Your struggles on the playing field do not minimize your platform for Christ. In fact, it may be even greater following a loss as it provides an opportunity to shatter the cultural expectation.

Our culture’s idea of happiness is attached to the blessings we experience in life. That’s why losing affords us an opportunity to show that our joy in Christ transcends outward circumstances. Athletic success may build the platform that gets you noticed, but how you respond to a loss might be what allows you to capitalize on it for the glory of God. NFL reporter Trevor Sikkema recognized the peculiar faith of Parkey on Twitter: 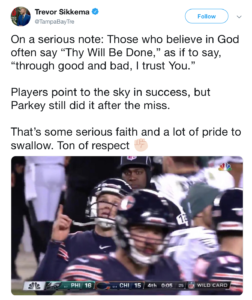 But is God’s glory relegated to social media fame? Can he get glory in ways that don’t involve a spotlight? I think so. Here are a few other ways we can glorify him after a losing effort.

Can we be honest here? Most, if not all of us, will respond to a loss in a sinful way, whether through outward actions or inward thoughts. Sometimes the simplest way to glorify God is through confessing your sin to him. Here’s a prayer that I have prayed many times: “God forgive me for my actions following the loss today. I placed more value on the outcome of a game than I did in my allegiance to you. Forgive my inappropriate fixation on both my failure and success in the midst of competition that I reject the grace you freely offer me to move forward. Help me to find contentment in you, not in the outcome of a game. Give me the grace to do better next time.”

It is worth noting that I believe athletes can be upset and frustrated by the loss. That’s a normal human response when things do not go our way. The question to ask is “Does this frustration lead me to sin?”

If it does, recognize it, confess it, and thank God that He forgives your sin quicker than you get over a loss.

Maintaining perspective is key. Here’s some mic-dropping truth from Stephen Altrogge from his book Game Day For The Glory of God:

“No matter how significant they may seem, all our wins and losses are insignificant in the grand scheme of things. There are no lives hanging in the balance, nor is the peace of the free world dependent on whether we win or lose. God’s kingdom will continue to advance even if our softball team doesn’t.”

At the end of the day, it’s a game. Your internal and external response should reflect that reality. As we’ve said, being upset is understandable in the moments after a loss. However, a Christian athlete’s mourning period following a loss should be pretty short.

Real tragedy comes not only when we lose the game but when we lose focus on what God prioritizes: our heart’s response to adversity. And a loss gives us a window of opportunity to see what’s under the hood.

OPPORTUNITY FOR A HEART CHECK

If we want to have a proper perspective on losing and respond in a way that pleases God and brings us contentment, we need to pay attention to what’s going on in our hearts following a loss. Here are some good questions to ask yourself after a losing effort:

I believe God is glorified when we do the hard work of introspection to see where the good things and blessings in our lives may be turning into idols.

LOOK FOR THE WINS

Often, losing feels like a step back, a missed opportunity. It’s hard to see how anything good could come from a loss.

We do well to remember that God often works in ways that are different from what we would expect. Isaiah 55:8 reminds us that our thoughts fail to align with his thoughts, and our ways of doing things are different than his. In light of that truth, we need to ask this question: What opportunities does losing provide? That requires that we pay attention to what is going on around us because of a losing effort. Even if the door to winning slammed shut, what other doors could God be opening?

Your sport is ultimately a vehicle to help you love God and serve others. It’s not just for you. We can’t make a deal with God that rewards our obedience with wins. God has shown us that his blueprint for expanding his kingdom often involves seemingly backward methods.

God asked Abraham to sacrifice his own son, a son through whom God said he would bless all nations. He asked Gideon to substantially reduce the number of people in his army before going on the offensive. He told Joshua to walk around Jericho for a week blowing trumpets instead of attacking the walls using conventional methods of war. He took everything from Job instead of rewarding him for his obedience. He sent his one and only Son to die in our place. Get the point? Just because things didn’t work out the way you wanted or expected doesn’t mean God isn’t up to something good. Ask him what he is doing, and express an openness to join him in it.

FOR THE REST OF US LOSERS

Here are a few ways the rest of us can look different outwardly following our losses:

Athlete, God is glorified when we look different than everyone else. Don’t waste your losses. Cody Parkey sure didn’t.

*This was modified from a previous post titled Can God Get Glory When We Lose?